What began in the Northern Pacific Center in Brainerd has evolved and moved to Nisswa, MN

At Roundhouse Brewery, we craft superior beers in a uniquely historic setting. Starting with the highest quality ingredients and a passion for the pursuit of an exceptional pint – we aim to brew and distribute unsurpassed beer to Nisswa, the Brainerd Lakes area and beyond. We believe deeply in this community and strive to provide not only a great beer but an enjoyable experience. We want this experience to allow our guests to connect with our brewing methods, the history of this area and each other.

Well, take a look at these pics from up above. A Roundhouse was used in these (and many) old rail yards as a place for trains to enter onto a turntable, yes, like your parent’s old record players. The cars were detatched and rotated to line up and enter a specific garage stall for repairs or maintenance. The black and white pic is of the original roundhouse here in Brainerd. Iconic at one time, the building was demolished and the footprint remains right ourside our front door as is seen in the color pic. We basically outgrew our space.  As much as we wanted to stay in Brainerd, the demand for more of our product meant we needed a larger facility.  We saw an opportunity to move in to the old Gull Dam Brewery location and make it a little more “Roundhousey”  With an expanded taproom, a huge outdoor seating and entertainment facility, along with a private event space and soon to come kitchen and Wreck Room (where you can throw axes at targets) Roundhouse has become a destination for all sorts of events.

Roundhouse was born from the idea that Brainerd needed a brewery that served the community.  And the location was decided upon based on the history that the old Northern Pacific Rail Yards provide, and their historical connection to building the city of Brainerd.

Dan Meyer and Mark Lelwica dreamt up the idea of Roundhouse, and have a history that goes back many years.  They were both raised in Staples, just down the tracks.  Having some basic home brewing experience, and knowing they wanted to run the brewery, they reached out to an old friend and fellow beer lover, Chuck Martin, also from Staples, to see if he would be interested in being the brewer for Roundhouse.  Like most brewers, Chuck got his start home brewing and had been brewing in Ohio for a small brewery there when he was invited to come back and brew for Roundhouse.

Roundhouse opened its doors in April of 2016 in the Northern Pacific Center in Brainerd.  What began there with a  7-barrel brew system with 4- 7 bbl fermenters, a 7 bbl Brite tank in about 1200 sq. ft. of production space and a 3000 sq. ft. taproom has now evolved.  In August of 2020, in the middle of a global pandemic and recession, Roundhouse thought it best to expand.  We purchased the old Gull Dam Brewery building in Nisswa and moved our business there.  With a much larger brewing system (approx. 3x larger) and a large taproom, we not only have the capacity to provide more product, but a broader experience as well.  Our new taproom is 3500 sq, ft and can house over 200 people as it is currently set up (before Covid restrictions).

The taproom is furnished with tables made from lumber Dan and Marks’ dads had collected over the years, again from Staples.  The square tables with chairs came from Culver’s as a result of a remodel.

Our location is in the heart of a very healthy adn robust tourism ecosystem.  We embrace that and our brand and feel strives to connect people with the rich history of the area, to include the railroad and many other industries that have helped build this area to what it is today.

Roundhouse looks to serve the community of Brainerd with a fantastic product and service.  Roundhouse is a gathering space for anyone interested in a comfortable setting, a relaxing environment, and a superior product.  We also offer Non-alcoholic beverages and cater to families of all ages.

Remember, it’s beer!  Of course, it’s going to be good. 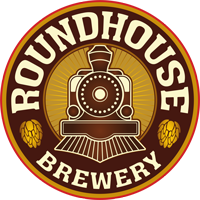